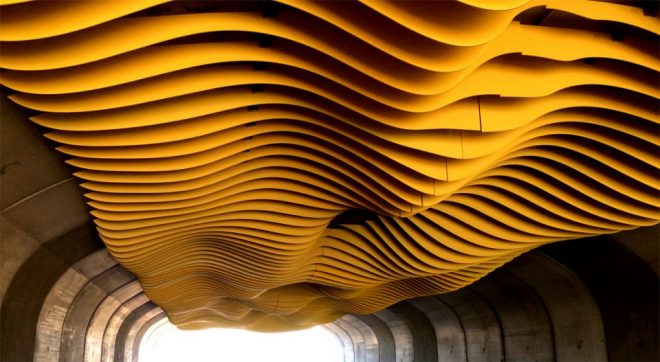 When I was a kid in Colorado, my family would travel almost every weekend to my grandparents’ antique shop in Silver Plume or to the family cabin in Pine. Those drives into the Rocky Mountains always took us through tunnels that marked our ascent into a different world from the plains below. That memory played a role in my choosing the pedestrian underpass in the Sand Hills Prairie Park at Denver’s Stapleton Airport as the site for this installation with my friend and co-designer, Aaron Whelton. Located in a relatively cold, windy, and unwelcoming part of the park, this tunnel seemed like the perfect setting to create an inviting, engaging space. Our challenge was to develop a concept that related to the natural history of the area.

Long before Stapleton’s runways and facilities transformed the area into a busy urban landscape, this particular corner of the Denver metro area was covered in sand dunes. They were my inspiration for “Drift Inversion,” a 23′ x 128′ installation that turns the original landscape upside-down to create a surreal experience for any visitor who happens upon the underpass.

In a previous post I shared some of the preliminary design renderings that Aaron and I created for the project proposal. Once those were approved, we focused on working out the endless details with the City of Denver’s engineers, my engineers at IDE, and my fabricator Kurt Nordquist at DaVinci’s Workshop.

Each of the sculpture’s 258 aluminum “fins” is unique. To keep track of their specific locations, we assigned a number to each piece to identify its place in the length of the tunnel, and a corresponding letter to identify whether it went on the north or south side. These identifiers were added as each fin was water-jet cut, and we took great care to keep consecutive numbers in groups to make the installation process easier.

Once the cutting was complete, Jonathan Arreola, Juan Sanchez and Joshua Arreola, at Northwest Custom Auto Body in Burien did the painting.

While Jonathan finished the painting and we readied the fins for transport to Ship/Art in Denver for warehousing, Rio Grande Co. (also in Denver) was busy gathering all the hardware and fabricating the 1,548 galvanized steel brackets we would need for the installation. In the end, the project required nearly 12,400 individual elements (nuts, bolts, washers, bushings, and other hardware) including the fins, which, by themselves, weighed nearly 16,000 pounds.

Structural installation begins (despite the weather)

The pedestrian underpass that houses “Drift Inversion” provides a glorious window to the Rockies in the West and a portal for viewing incredible rainbows in the East. It also seemed to focus and intensify the weather we experienced during installation. Every kind of Colorado spring storm imaginable passed through during that two weeks: heavy snow and bitter cold, a downpour with jawbreaker-sized hail, steady rain, 80-degree days…you name it, we had it.

Work began on a frigid, windy Friday morning that evolved into a very snowy weekend. Despite the enormous challenges of working overhead in the biting cold, Mike Adcock of Adcock Concrete in Grand Junction, CO, and his helper, Alexandro, did an incredibly accurate job installing all of the structural elements that ultimately would support “Drift Inversion.”

Over three days, the crew installed 1,500 brackets and nearly 1,000 feet of Unistrut.

Once all the structural elements were in place, it was up to the Franklin family and some devoted friends to install the sculpture’s 258 fins. It was a truly epic process, supported from the sidelines by many folks bearing hearty lunches and words of encouragement, including my high school friends Chris Flores and Heidi Gartland, Bruce and Tricia Gallagher, my mom, and my sister in-in law, Brooke.

A few more thanks

There were so many helping hands involved in this project. I acknowledged some people earlier in this post, but would be totally remiss if I didn’t mention the invaluable support of these folks, too: My truly amazing wife, Joanne; the quintessential art professional, Barbara Neal; Alexander Abel with Adcock Concrete; and all of the members of the Park Creek Metropolitan District Public Art Committee who made this installation possible. Thank you all!

This weather sure makes winter seem far away! Tha