Why make a ceramic school of fish?

The concept for “The Ghost School” came from an urge to make a hanging sculpture that captured the dense swarming beauty of a school of herring surrounded by predators. Why do these dense schools of bait fish form? Protection from predators. Since we eat what eats them, it’s these cloud-like schools of fish that we look for when salmon fishing out on the Salish Sea with my family. It’s also the kind of formation of fish that countless predators large and small seek around the world to feed on in large lakes, seas, and oceans. Flocks of sea birds will also give away where these schools of fish are as they circle and dive to feed on them. 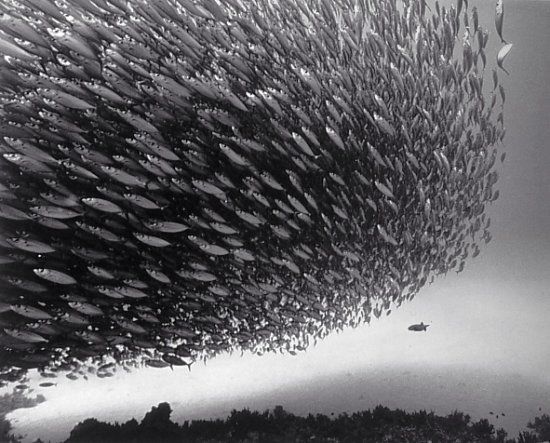 Bait fish or forage fish like herring, anchovies, sardines, eulachon, smelt, and alewives form a vital link between the tiny creatures they feed upon, like plankton, and the larger fish we eat, like salmon. They also support creatures like diving birds as well as whales, sharks, and many other creatures. These species are under a lot of pressure from overfishing and a number of other factors and their numbers are declining rapidly. This is the case in my neighborhood, and as they go, so do the birds and fish that feed on them. That is why this art project became “The Ghost School.” I created it to add voice to the alarm and to honor these small fish that are beginning to disappear from our waters. 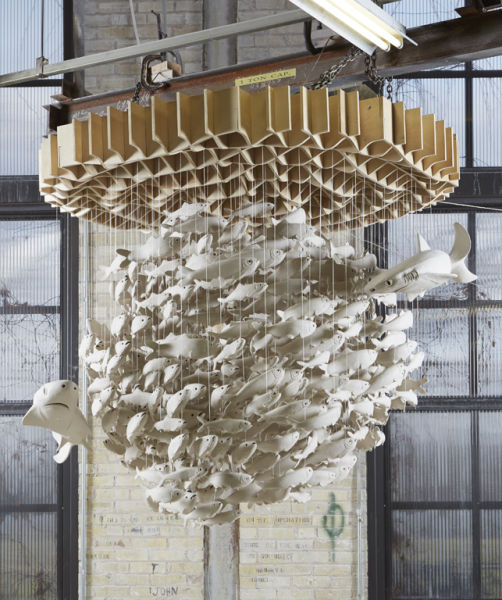 Thankfully, as awareness of the issue grows, these fish have been getting some good press lately. There is a great short film made by Jesse Nichols, a talented young man from my hometown, that explains the importance of forage fish and some of the action being taken to preserve them in Western Washington. To the north, First Nations groups led by the Heiltsuk in British Columbia are leading protests agains commercial over-fishing and closing their own vital fishery to try to maintain the viability of herring stocks and to raise a greater awareness to the decline of these precious resources. Also, National Geographic recently did two articles about the struggles facing fish like these, which can be found here and here.

How I Made the “Ghost School”

To make the Ghost School I started with seven carved fish and two carved sharks. Each fish was a different size and had a different curved form. These were then molded, cast, fired, recast and fired again to create 16 different sized fish molds which provided the needed variety for the natural look of “The Ghost School.” Here are photos of the process:

During my peak production my goal was to cast sixteen fish twice a day. This yielded around twenty seven good fish, as I would consistently lose several when releasing them from their molds, due to broken fins and sometimes full-on collapsing.

Support structure – or, what’s it hanging from?

I needed a structure to hang the fish from, one that could carry the significant weight of the number of fish it took to take to create the school. The school is very heavy, as all the fish and sharks are made from the same vitreous china that all ceramic Kohler products are made from (resident artists work within the factory and use all the same production materials). The structure also needed to work with the water/school of fish theme. So I enlisted my public art team of Arron Whelton and Kurt Nordquist to help design the interlocking plywood grid to support the school of fish.

I designed the lower surface of the support structure with a sculptural ripple effect that is similar to my last couple of public art projects. Visually, it serves to places the fish underwater as well as relate it to my greater body of work. The structure was hung from a steel beam used in the studios for operating chain hoists for lifting heavy objects.

Each fish is suspended from pairs of holes to ensure they do not freely rotate. The fish are supported on 250 lb braided test fishing line with antique venetian glass beads.

It took three months and 468 fish to complete the Ghost School. None of this would have been possible without the support of my amazing wife Joanne, who continues to support my crazy ideas all these years, and who took care of everything at home while I was away, most importantly our three beautiful busy daughters.

The associates at the factory, whom I count as good friends, were a huge help and pleasure to work with. Also thanks to the people at the John Michael Kohler Arts Center, especially Kristin Plucar. Shari McWilliams, the program tech, was indispensable. The piece will remain in Wisconsin as part of the Kohler Company collection and displayed in one of their hospitality properties for public viewing. I would like to thank Laura and David Kohler and Kohler Company for making this possible.

Finally, none of the Arts/Industry residencies would be possible without the kindness, generosity, and great vision of Ruth Kohler, who started the residency program over 40 years ago and has brought new and greater possibilities to artists like me ever since.

Because every residency needs at least one side project! “Ghost TV” is a collaboration with Paul Roehrig, the caster that makes this large flushable hospital ware sink known as a “TV.” His work station was near mine and he wanted to collaborate on a piece of artwork. He has been working at Kohler for nearly as long as I have been alive and is a master of the most difficult pieces, and I was honored to be given this to work on.

You are invited to the #openstudio and art show @n